It’s not unusual for ex-racers to participate in product testing, but it’s rare for a major brand to toss the keys to the R&D department to three former World Cup stars with instructions to build the best ski they can, unconstrained by FIS regulations. That’s how Fischer facilitated the creation of RC4 The Curv DTX, a high-powered Technical ski loaded with every feature in Fischer’s technology tool chest. Headlining the ski’s materials composition are two .8-mm sheets of Titanal (thicker than normal) and Diagotex™ Torsion, an angled weave of carbon that muffles shocks and resists twist. Built for high speed at high edge angles, Fischer’s RC4 The Curv DTX deploys a triple radius sidecut to accentuate turn entry and exit. This makes it exceptionally agile for such a strong, stable ski. While it’s unabashedly made for experts, RC4 The Curv DTX lacks the imposing Booster plate that adorns its stablemate, and so it’s a bit easier to bend at subsonic speeds. One tester declared RC4 The Curv DTX 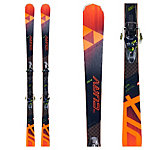 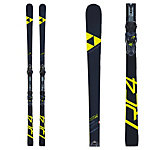